What Other Plants are Related to Kratom? 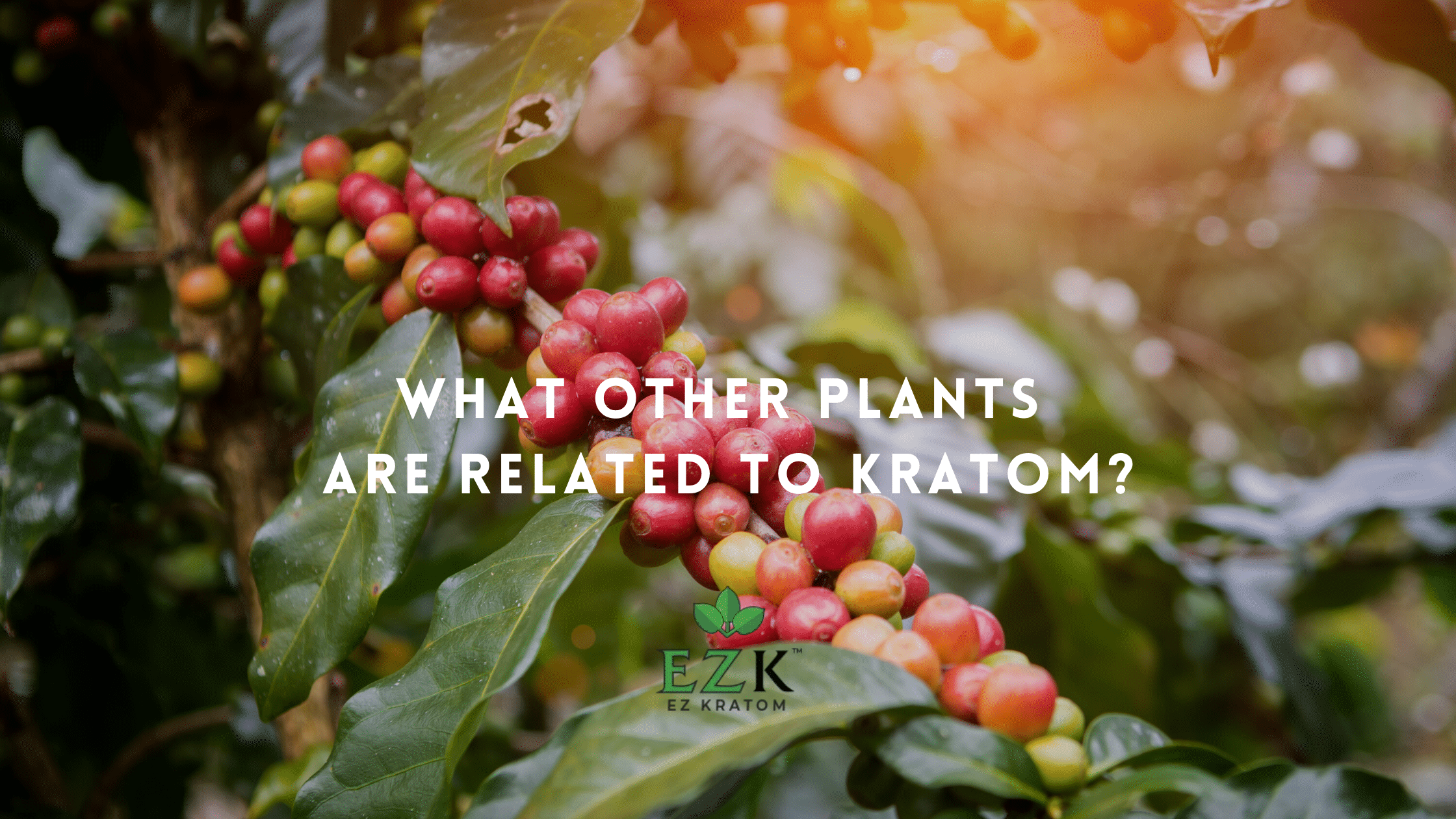 The plant world is diverse, to say the least. Tallies have supported numbers of plant species close to 400,000, but new discoveries are being made every day. The fact that we have so much more to learn from our plant friends is no wonder.

As it turns out, there are quite a few plants related to Kratom: 13,000 species across over 500 genera, all in the Rubiaceae or Madder family. So let’s find out why everyone is madly in love with the Madder family plants.

This tropical, deciduous tree is native to South East Asia. Its first documented use in Thailand is in 1836, however, according to traditional and oral histories, its use has been around for centuries.

Thai folk medicine used the leaves of the Kratom tree to calm coughs, diarrhea, chronic pain, and to boost energy. Kratom’s leaves were chewed by the lower-income working class as an aid to get through their long, hot days in the fields or factories.

The effects of Kratom are similar to both opioids and stimulants. Small amounts boost energy, alertness, sociability, and pleasure receptors. Large amounts cause the compounds in the leaves to bind with the brain’s mu-opioid receptor, eliciting a calming, pain-relieving state of mind and body.

There is a lot of dissenting opinions about Kratom, which is largely due to ignorance, lack of funding for scientific studies, and Nixonian disciples still trying to wage their misinformed war on drugs. Kratom is not the first, nor will it be the last of the Earth’s natural medicines to undergo such scrutiny. So stay informed and keep reading about plants related to Kratom!

There are 3 main varieties of Kratom, distinguished by the color of the veins on the leaves;

Before considering using this product, or carrying it in your store, it’s important to know the differences and their effects. You can find invaluable information online from users who have documented their experiences.

Coffee is the 2nd most popular drink around the world. It may surprise you to discover that it was not always accepted and welcomed, subject to much scrutiny in its beginnings.

Native to Ethiopia, popularized by the hard-working goat herders that needed a boost to get through their day, made OG Clif bars. Later, Sufi monks would discover that the beans taste much better when roasted, ground, and brewed in hot water.

As trade routes spread and caravans traveled far and wide, coffee spread to Europe. Its initial appearance delighted the public, however, because it’s black and came from Muslims, the Catholic Church deemed it ‘the Devil’s Brew’.

Until the Pope tried it, loved it, and baptized it.

In 1746 Sweden banned the consumption of coffee and all coffee paraphernalia. Convicted murderers were the only ones allowed to drink coffee, thought to be slowly killing them.

While it may seem incredibly ubiquitous in our society, and wildly available in almost every town, even our beloved coffee has been subject to discrimination and controversy. Through knowledge and study, we have found coffee to be universally loved across all kinds of different cultures and accepted in societies today.

The bark of this amazing tree is where we find the cure for malaria, among other things. Yes, it is also related to Kratom and coffee.

The trees are native to South America, which turned out to be super convenient. European colonization of the Americas brought all kinds of fun things with them on their ships, malaria included.

Before malaria began to spread rampantly, the bark of the quinine tree effectively treated fevers, bloating and stomach issues, hemorrhoids, and leg cramps.

Thanks to the quinine tree, malaria is now extremely preventable and curable and has been for a long time. It’s hard to believe that over 400,000 people died of malaria in 2018 alone.

The roots of this tree are used to make a syrup, as an expectorant for coughs, and as a powerful emetic. If something is emetic, then it will cause you to vomit…a lot.

Poison has always been a popular way to kill people. Kings, Queens, and aristocrats everywhere had people they paid to taste their foods for them. Syrup of Ipecac deserves to be in everyone’s medicine cabinet, just in case.

Often, travelers and hikers have had to, and some still do, forage for their food to survive. When trial and error is the best science you’ve got, this syrup is also very good to have on hand.

There are more than 250 different varieties of Gardenias, but all of them are beautiful and smell amazing. They also have a surprising amount of medicinal qualities for which Traditional Chinese Medicine (TCM) has taken full advantage.

The many antioxidants found in Gardenias can aid in inflammation reduction, weight loss, soothe digestive tracts, and apply topically to wounds and burns to help fight infection. TCM uses Gardenias in teas or powders for its cooling, calming, and clearing properties.

Definitely not just a pretty flower to look at, this relative of Kratom comes with so many natural benefits.

There are So Many Plants Related to Kratom

The Kratom tree is part of a very large family, filled with flowers, medicine, and delicious beans. If you’re considering adding Kratom to your lifestyle, then it’s good to know it has a relative that likely already dominates your morning routine.

When considering supplying Kratom to customers and shopping wholesale, it’s important to know just what your customers are looking for when they want to try Kratom. Kratom is a wonderful plant that deserves to be sourced, harvested, and processed with respect. As do any and all of the other plants related to Kratom.

Find what you’re looking for out of life and business and make plants and their products a lifestyle.