7 Surprising Facts You Need to Know About Bali Kratom 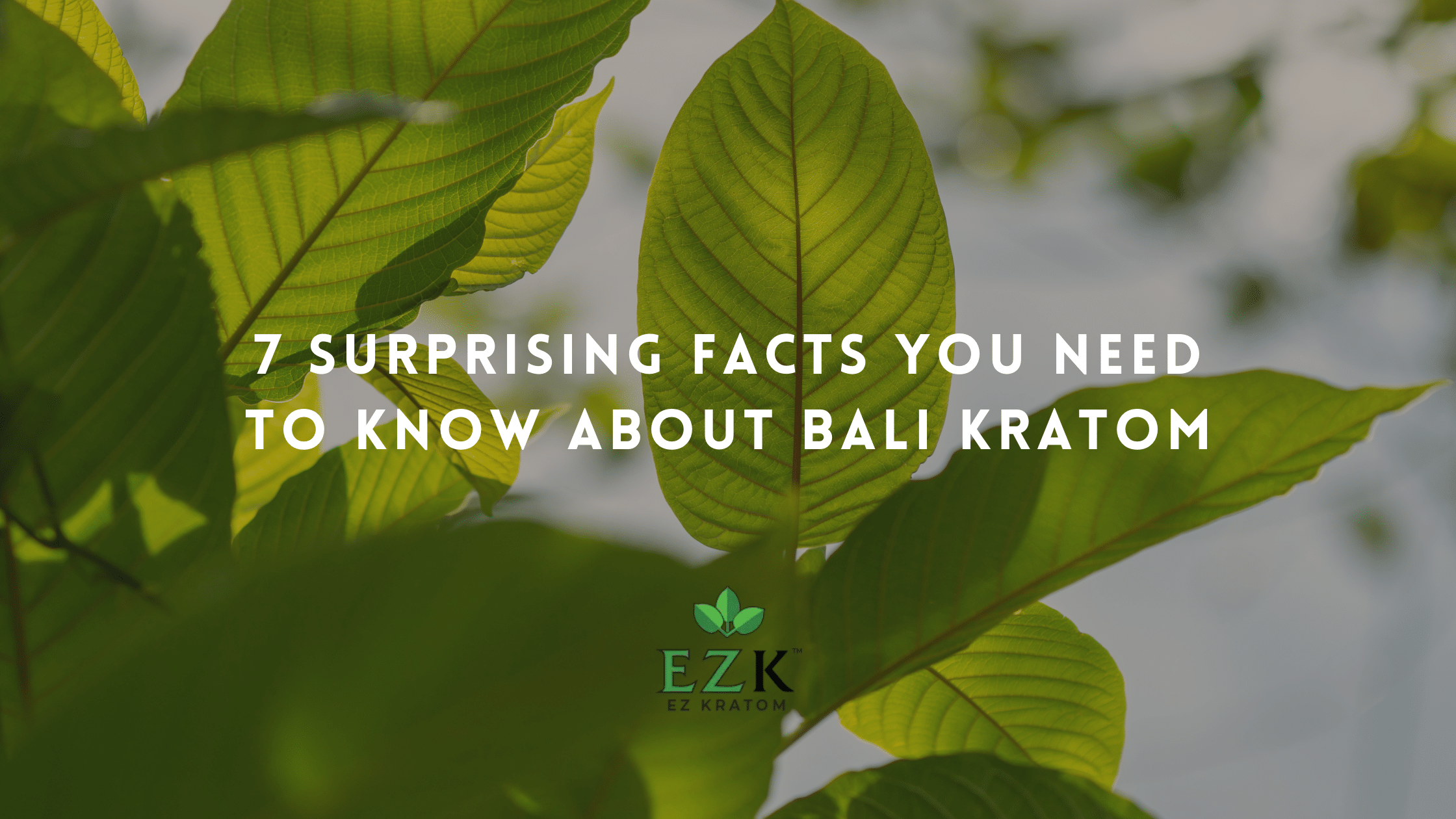 You might have already heard of Kratom. It’s a substance that comes from an evergreen tree known as mitragyna speciosa. Kratom is native to Southeast Asia, but in recent years it’s been steadily gaining more popularity both in North America and Europe.

There are many different kinds of Kratom available. Types may be differentiated by their region, the soil types in which they were planted, and what they are most commonly used for.

Bali Kratom is one of the most popular strains. If you’re interested in Kratom, it’s something you’ll definitely want to find out more about. If you’d like to learn a little bit more about Bali Kratom, including some facts that may surprise you, read on to find out everything you need to know.

What Exactly Is Kratom?

Before we dive into the details of Bali Kratom, we’ll cover a little bit about Kratom in general. What is it, and how is it prepared?

Farmers harvest kratom from the mitragyna speciosa tree, which is typically found in tropical rainforest environments. Although many farmers also attempt to plant their own Kratom plants in open areas, it is difficult to grow outside of its natural environment. As a result, the vast majority of the world’s Kratom supply comes from various countries across Southeast Asia.

When the leaves have matured, they get picked, cleaned, and then dried out. Once they have been sufficiently dried, they are ground into fine dust and from this point, processed and packaged. Kratom is usually sold to buyers in liquid, capsule, or powdered form.

The main producers of Kratom in Southeast Asia include Thailand, Malaysia, Papa New Guinea, Myanmar, and Indonesia—which is where Bali Kratom hails from. Let’s take a closer look at this Kratom type.

Bali Kratom is a common and popular type of Kratom. There are many reasons for this, one of which being that it is one of the most readily available.

The Kratom plant tends to grow quickly in Bali, and it produces larger than average leaves. This may be because of the soil, the climate, or a number of contributing factors.

The way in which it grows and matures makes it easy to harvest and makes yields more plentiful than they perhaps would be with other types of Kratom varieties. It also means that it is more economical to purchase for customers.

2. It’s Been Around for Hundreds of Years

Kratom has been harvested and sold for hundreds of years. It’s an ancient substance many people of Southeast Asia use on a daily basis.

It was first formally described by a Dutch botanist in 1839, almost two hundred years ago. Its first official name was stephegyne speciosa.

After undergoing many reclassifications, it was finally formally named and classified as we know it today in 1959 by a British naturalist. It has appeared in many scientific journals and been of much interest to botanists and scientists since its formal recognition.

3. It’s One of the Most Popular Types of Kratom

This is not only due to the abundance of Bali Kratom produced, however. Bali Kratom is also beloved by Kratom enthusiasts because of its makeup, its availability on the market, and its affordable price.

4. There are Different Types Available

As with all varieties of Kratom, Bali Kratom has a number of different strains. Bali Gold, Red Bali, and Green Bali are the three main types you’re likely to encounter. Each one has its own origins and characteristics that make it unique.

When it comes to the different colors of Kratom, the distinction is usually determined by the maturity of the leaves at the point of harvest. Kratom leaves have red veins at the immature stage of growth, white veins at the middle of the life cycle, and green veins once they reach maturity. These colors correspond to the strain of kratom when it is purchased.

Bali Gold, on the other hand, is a type of Kratom that somewhat defies definition. This is because there appear to be different instances in which a farmer will label their Kratom Bali Gold. The two main occasions are when the Kratom has been dried in the sun or when the Kratom powder has been mixed with other strains of Kratom to imbue it with particular characteristics.

Alkaloids are a type of compound found in many different places, one of which being the leaves of the Kratom plant. They are believed to be the reason for some of Kratom’s impressive properties. Certain types of Bali Kratom—Red Bali Kratom in particular—are known to have high concentrations of alkaloids.

The concentration of alkaloids can depend on where and how the plant has been grown. It is believed that one of the key factors in alkaloid levels is how the leaf is dried out during the harvesting process, however.

Bali Kratom is often suggested as being well suited to those who do not have much kratom experience. This is because it tends to be uniform in its production, and thus has predictable results. Red Bali Kratom is also the mildest of all the red kratom strains.

7. It’s Not Always From Bali

Although the name would have you fooled, it’s a fact that not all Bali Kratom you will come across is actually 100% a product of Bali or even Indonesia. Because it is so plentiful and so popular, Bali Kratom is often mixed with other strains from different countries.

Bali Kratom: See for Yourself What the Fuss Is About

If this article has piqued your interest in Bali kratom, why not find out for yourself what all the fuss is about? Browse our range of high-quality Bali Kratom products today.