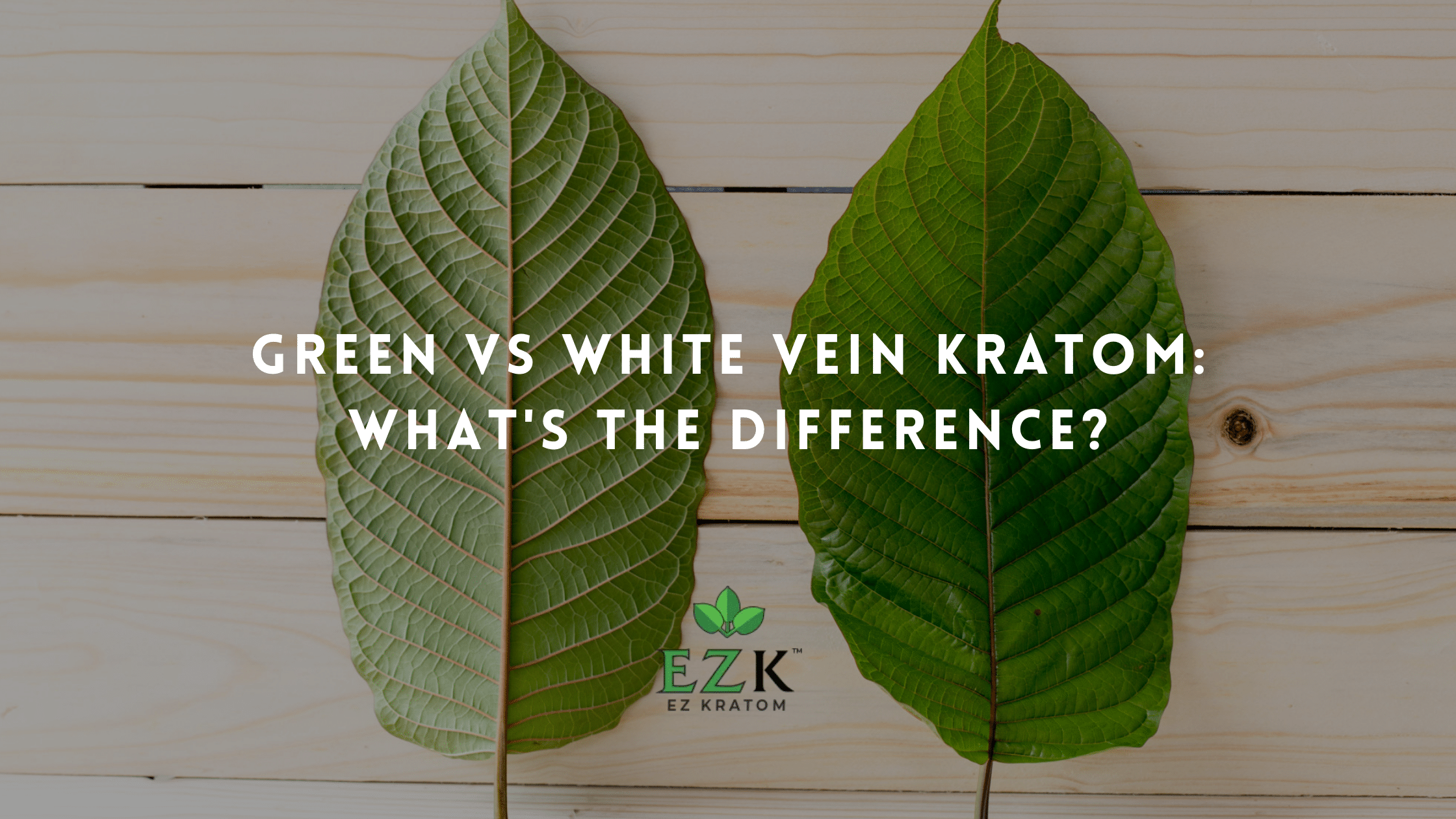 The recent rise in popularity and knowledge of kratom has had a lot of people asking questions about the plant.

Information about the plant you find online can seem a bit all over the place, and it can be hard to understand the difference between the different strains.

Are you wondering what the difference is between green and white vein kratom? Did you know that there’s also a strain known as red vein kratom?

Let’s take a look at everything you need to know and more about red, green, and white vein kratom.

Kratom is the common name for the Mitragyna speciosa plant. Native to Indonesia, Thailand, Myanmar, Malaysia, and Papau New Guinea, kratom is in the coffee family. This tropical evergreen tree has been historically used in traditional cultures where the plant is indigenous.

The active ingredient in kratom is known as mitragynine, which is found in the leaves of the plant.

In Southeast Asia where the plant is native, it goes by a number of different names. These include ketum, thang, thom, biak, kakum, and kakuam.

Red vein kratom is named after the reddish color of both the stems and the veins of the plant. Red veins indicate that these leaves are the most mature variety.

These leaves are dried using a UV lamp or direct sunlight. It is also sometimes fermented as a part of the process. This creates bentuangie kratom.

When used traditionally in the cultures where kratom is native, red vein kratom is said to promote a sense of calm.

It’s important to know that the FDA has not approved kratom. At this time, there aren’t any uses for kratom that have been approved by the FDA.

Green vein kratom means that the veins are a greenish color. This indicates that the leave were neither picked at their youngest nor at their most mature. They are aged between the red and white vein kratom leaves.

When green vein kratom leaves are harvested, they are allowed to dry indoors to start with. This typically occurs in a room that is air-conditioned. After this, the drying process is completed outdoors.

This is similar to how white tea is made by harvesting the younger leaves from a tea plant.

White vein kratom leaves are dried indoors after harvesting. They are dried without the presence of any outdoor or natural light.

When used by traditional cultures in its native region, white vein kratom is said to have a mild stimulant effect. It has historically been associated with alertness and increased energy.

Many kratom strains are named after the location where they are from. You will also commonly find the vein coloring in the name of the strain.

This strain originated in Thailand. There are also Malaysian and Indonesian versions of maeng da strains. This strain can be white, red, or green vein.

This strain is grown in Indonesia. It is available with red, green, or white vein coloring.

This is another strain that comes from Indonesia. It is typically available in the red vein variety.

As one might assume, this kratom strain comes from Thailand. It is available in white, green, and red varieties.

Available in white, green, and red varieties, this kratom strain comes from Borneo.

Available in white, green, and red varieties, this kratom strain comes from Malaysia.

What Are the Different Forms of Kratom?

There are a number of different forms of Kratom. It’s available in the form of powdered or dried leaves as well as an extract.

How Is Kratom Extract Made?

The first step in making kratom is harvesting the leaves of the kratom tree. This is done in Southeast Asia where the plant grows natively.

Next, the leaves need to be dried. This is done either by placing them on drying racks or in a spot where they are exposed to the sun. After the leaves have cured, the leaves are crushed into powder.

The next step is to boil the crushed leaves. From this process, a concentrated extract is created.

You can sleep easy at night now that you know the difference between white vein and green vein kratom. You’ll also be glad to know about red vein kratom, too!

Kratom has had a long and interesting history in Southeast Asia. Its recent popularity in western countries has led to a lot of people being curious about this plant in the coffee family.

When purchasing kratom, you want to be sure you find the highest-quality product. It’s important that there aren’t any additives or fillers added into the product. It can be a good idea to buy kratom from farms that are small and family-owned.

If you aren’t buying kratom from a high-quality company, the processing of the leaves might have been imperfect. It’s also important that the machines used in processing are clean and well-cared for.

Are you interested in purchasing wholesale kratom products? If so, be sure to check out our online store today!