7 Things You Need to Know About Red Borneo Kratom 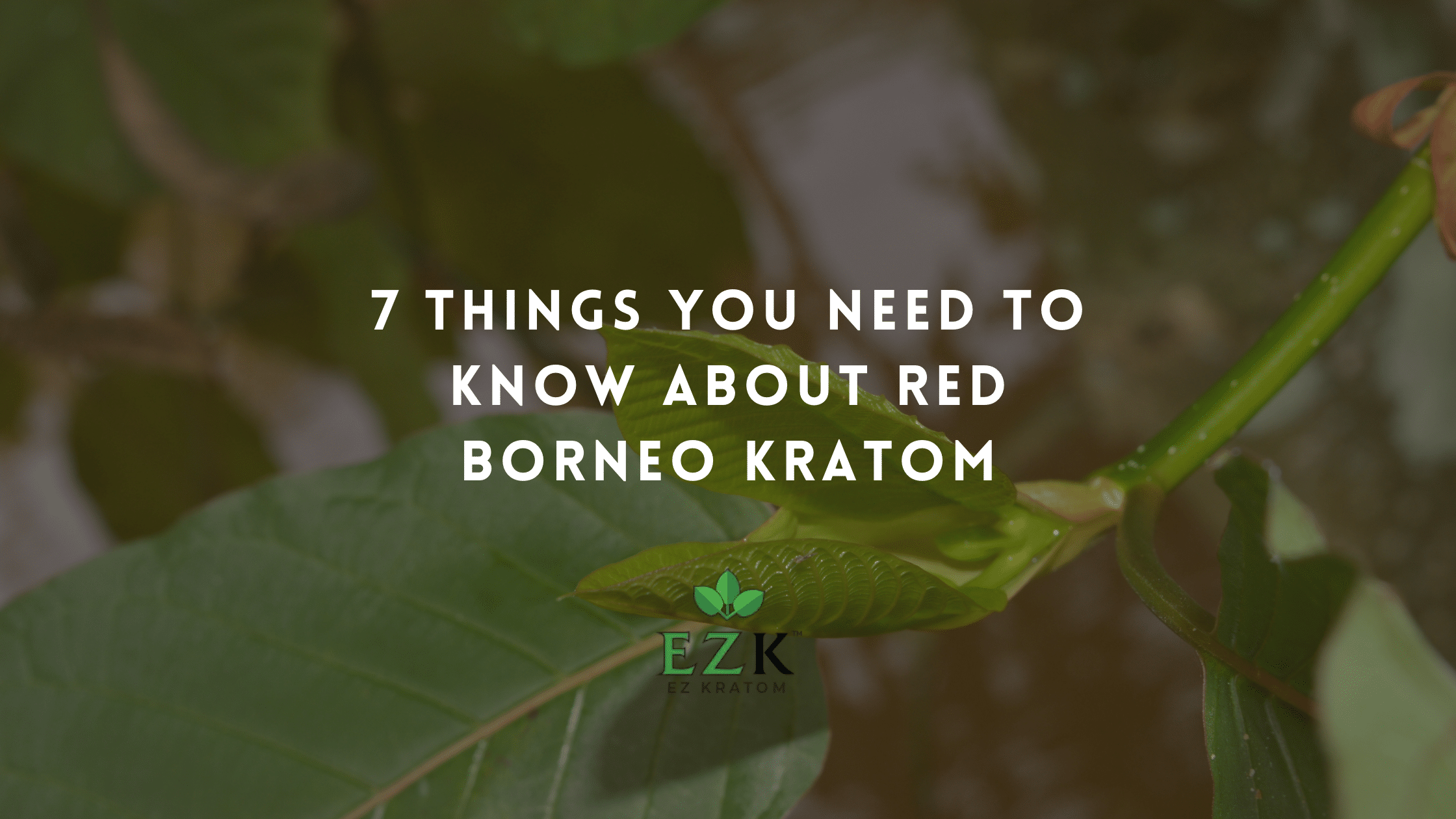 Red Borneo is a unique kratom strain that deserves your attention. Having been around for centuries, there is much to know when it comes to this particular herb strain. Although research is still underway for this traditional, therapeutic plant, we do have some information about it.

Aside from being the most well-known of the strains, what makes Red Borneo kratom unique? Where does it come from? What form does it come in? If you’re unfamiliar with kratom and its uses, these are all valid questions.

If these are the questions that have crossed your mind, then keep reading to find out. We will discuss seven things you should know in this Red Borneo kratom review.

1. What Is Red Borneo Kratom?

Kratom is a psychoactive substance derived from the tropical tree Mitragyna speciosa, or Kratom tree. It has a long-standing history of traditional therapeutics. In Southeast Asia, it was often farmed by the localsl

Today, there are several variants of kratom, each with its own reported effects. Out of all the strains available, Red Borneo kratom is arguably the most popular and well-known.

The different kratom strains are distinguished by the vein color and type of the leaf, and there are three color variations: white, green, and red. All have different reported effects. This strain is produced on the island of Borneo and is aptly named for its red color vines.

2. It Originated in Southeast Asia

Originating in Southeast Asia (specifically Thailand and Malaysia), kratom is a member of the coffee (Rubiaceae) family. However, it’s not limited to SEA. Kratom is now cultivated elsewhere as well, like the United States.

Kratom is an evergreen tree and can grow to an impressive height of 82 feet. The trunks are equally impressive, having been documented to reach 3 ft in diameter. The trunk is grey and smooth to the touch, and the leaves can grow to an exceptional 8 inches long and 5 inches wide.

Its leaves are reported to have some therapeutic uses and historically were used by laborers such as farmers, fishers, etc., to reportedly boost performance and aid fatigue while they toiled away in the sun.

This tree produces flowers that grow in clusters of three, situated at the end of the branch, and are a deep yellow in color.

People have used extracts from plants containing alkaloids for medicinal use for hundreds of years, and their powerful effects are due to the presence of these alkaloids.

Furthermore, in addition to their physiological properties, alkaloids have been found to potentially have anti-inflammatory properties. Although it’s wise to note that further research is still underway by way of evidence-based mice trials.

More than three dozen alkaloid compounds are found in kratom leaves, including the primary alkaloid mitragynine, which accounts for 66% of the total alkaloid content.

It’s essential to note that the maturity levels of the leaves have a more significant effect on the kratom produced than just their color. Different harvest times contribute to different naturally occurring alkaloid compositions in the leaves, which is what makes each strain different.

To date, kratom has not been well studied in terms of its behavioral pharmacology. However, while still in its infancy, ongoing animal studies might yield additional results and understanding.

It’s also important to note that The FDA has not yet approved kratom in the US.

With that being said, Red Borneo kratom is legal and obtainable in many states and municipalities. However, suppose you’re in Alabama, Arkansas, Indiana, Rhode Island, Vermont, and Wisconsin. You will find that it’s illegal to possess, buy, sell, or ship kratom in those states, and punishment could include a fine or jail time.

While not yet confirmed, users do report benefits. For example, in one survey of 8,049 people who bought kratom in the US, more than 2,000 admitted using it to reduce drug dependence or withdrawal symptoms related to illicit or prescription drugs.

In Southeast Asia, historically locals farmed kratom and processed while they are still fresh.

Kratom, where legal, is available in powder form, capsules, extracts, and resins, with the latter two forms being more strong in nature.

With Red Borneo kratom powder, users either stir the kratom into their beverage (usually orange juice) or orally ingest a spoon of the powder and wash it down with a liquid (often referred to by users as “toss and wash”).

With Red Borneo kratom capsules, manufacturers put the kratom leaf into capsule casings. This makes it preferred as the more convenient option out of the other forms.

Finally, while not as common as powder or capsules, kratom is also available in the form of extracts and, in rare instances, kratom resin. These are both concentrated forms of the plant leaf and can be rather costly compared to the powder or capsules.

Depending on the type of kratom used and the extraction method, the levels of concentration will vary.

If you’ve been doing some shopping for Red Borneo kratom, you might have seen an “Ultra Enhanced” version available. While identical to the regular Red Borneo kratom, this enhanced strain contains higher amounts of alkaloids per gram. This results in a more strong quality of kratom.

Kratom is a fascinating and complex plant, and we still have much to understand about its effects and contraindications. It is promising, however, that the results of some studies do indicate potential in this therapeutic plant.

It’s essential to find a reputable Red Borneo kratom supplier, so you know that you’re getting a top quality and enhanced product. So, if you’re looking to buy Red Vein Borneo kratom, be sure to view our extensive list of wholesale kratom products we have on offer.